After childbirth, mothers start to raise their children without fully recovering from the long maternity period and the physical discomfort caused by childbirth. Moreover, the body does not immediately return to its normal state after childbirth. What kind of constitutional changes occur in the body of postpartum mothers, and how do they recover?

It is easy to put off taking care of yourself while raising your child, but it is important to know the changes in your body correctly and take good care of it.

Maternity blues due to changes in hormone balance

During pregnancy, the secretion of female hormones increases rapidly, which has a great impact on a mother’s body and mind. For example, morning sickness, which many pregnant women suffer from in the early stages of pregnancy, is thought to be caused by changes in hormonal balance. The surge in female hormones during pregnancy is a necessary phenomenon to maintain the pregnancy. Therefore, one might think that the hormonal balance will quickly return to normal after childbirth.

However, after childbirth, female hormone secretion declines rapidly and gradually returns to the pre-pregnancy hormone balance over a period of about six months. The previously rapid increase in female hormones decreases drastically after childbirth, and mothers may experience “maternity blues,” which can lead to mood swings and tearfulness.

It is said that about 1 in 4 mothers suffers from maternity blues after childbirth. It is not something that is unique to you. However, it generally improves gradually by around 2 weeks postpartum as the body adjusts to the sudden change in hormonal balance. If the mood continues to drop after that time, there is a possibility of “postpartum depression”.

Posterior labor pain due to contractions of the uterus

During the 10 months of maternity, the uterus grows rapidly and eventually becomes more than 1,000 times larger than its original size. As the uterus tries to return to its original size in just 10 days or so, relatively strong contractions called “posterior labor pains” occur after childbirth.

The degree of pain varies from person to person, but it is generally believed to be stronger in women who have given birth. Many mothers say, “I can’t stand it unless I take medicine”. In addition, breastfeeding stimulates uterine contractions, so it is said that breastfeeding makes posterior labor pains stronger, while the uterus recovers more quickly.

Postnatal vaginal discharge is a secretion that occurs as the uterine cavity recovers from the damage caused by childbirth. It is a mixture of the fallen endometrium, remnants of the egg membrane, and bleeding from the uterine wall, which is discharged with vaginal secretions. First-time mothers may be surprised to see this. However, postnatal vaginal discharge is a sign that the uterus is returning to its normal state.

Postnatal vaginal discharge will continue for about one month after delivery. It is also characterized by changes in color and volume, with a large amount of red mucus being secreted immediately after birth. After about a week, it turns brown, and after two to three weeks, it changes from yellow to white. After one month postpartum, there is almost no postnatal vaginal discharge.

During this period, the wound in the uterus has not healed, and bacteria that entered through the vagina can infect the uterus. Use postpartum pads or napkins while you have postnatal vaginal discharge, but change them often to keep them clean.

Mastitis due to clogged milk ducts

However, during this period, mothers’ milk ducts are thin and babies cannot suck mother’s milk well, so mother’s milk often gets stuck in the ducts. This is the beginning of mastitis. If left untreated, it can cause symptoms such as high fever, chills, and fatigue, so be careful when there is a lump in the breast accompanied by tension or pain. We recommend frequent breastfeeding and milking when the tension becomes strong. 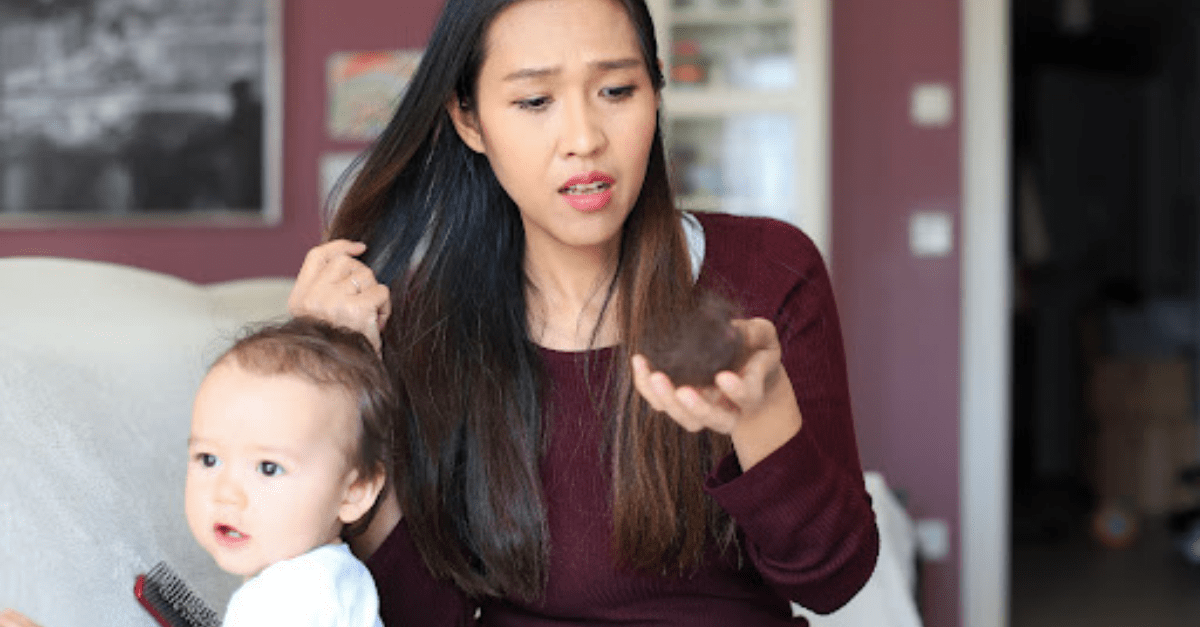 This is a good time to return your body shape and weight to pre-pregnancy levels, as you gradually become accustomed to childcare and are healing from the wounds of childbirth. However, be aware that in the frantic pace of child-rearing, you may not notice minor discomforts, which may worsen.

Hair loss due to decreased estrogen

Estrogen, a type of female hormone, maintains healthy hair and promotes its growth. After childbirth, estrogen secretion decreases dramatically, so hair does not grow and hair loss can increase. Especially around 3-4 months postpartum, hair that cannot grow due to the rapid decrease in estrogen production after childbirth begins to fall out all at once.

In addition, since thick, firm hair does not grow back, hair volume appears to be lost, especially at the top of the head. This type of postpartum hair loss is thought to improve naturally in the first six to 18 months after childbirth when the hormonal balance returns to normal.

Leakage of urine due to loosening of pelvic floor muscles

However, if the pelvic floor muscles are left loose, straining the abdomen or carrying heavy objects may cause a small amount of urine leakage. Especially during this period, the baby’s weight increases, which puts a strain on the mother’s abdomen as she carries the baby. In addition, since mothers also have to move around while raising their children, urine leakage can easily occur at unexpected moments. If left untreated, the loosening will be difficult to recover, so pelvic floor muscle exercises should still be done. 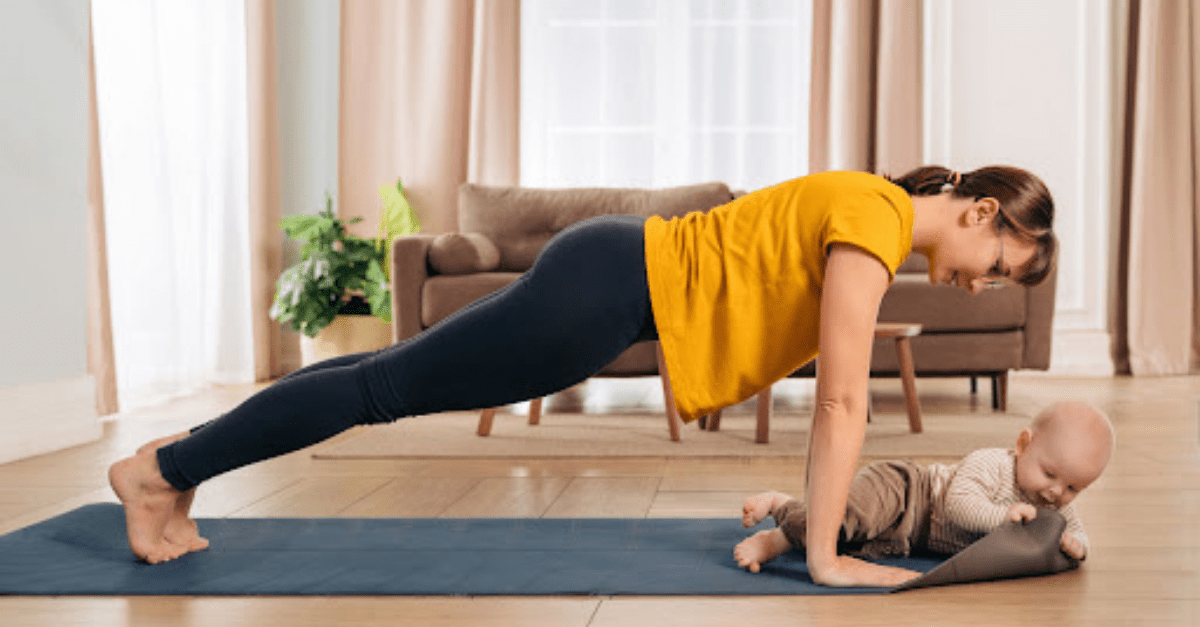 Around 5 to 6 months postpartum, when the baby begins to expand its sphere of activity and becomes more adept at “slithering,” it is difficult to keep an eye on the baby, and mothers’ fatigue may reach its peak. On top of that, baby food weaning and nighttime crying begin, making childcare even more difficult.

During this period, a mother’s body is trying to return to its pre-pregnancy state little by little as the hormonal balance and other factors are normalizing. Although the timing of the resumption of menstruation after childbirth varies from person to person, it will resume as early as 6 months after childbirth.

Prolactin, which is secreted when breastfeeding, suppresses the secretion of female hormones, so it is generally believed that breastfeeding mothers resume menstruation earlier. If menstruation resumes, it means that there is a possibility of pregnancy again. If you do not wish to get pregnant right away, do not forget to use contraception.

You may be worried about things that happen to your body after childbirth, however, once you have the knowledge, you may be able to handle them properly. Please refer to this article and be ready for that.

What Should I Do for Infertility Testing Part 2: AMH

In the previous article, we explained the infertility testing that you should take before you have a baby which is not o...

Who is Your Baby’s Father? The Latest Development in Pregnancy Tests

Women often use home pregnancy tests which detect if one is prospecting a child or not. But there are cases when some wo...

What Are The Best Maternity Shoot Poses?

Pregnancy is a beautiful thing, it is only normal to remember it through photographs. If you have a hard time deciding how to pose, we got you covered.

In the preceding article, we discussed the nature of working at the job while one is pregnant and the effect of work on ...

These days, when you want to have a baby or when you’re pregnant, you may hear that it’s better to take omega 3 fatty ac...
Painful Sex in Women
When Does Taking Care of a Newborn Get Easier?
Home
Belta Folic Acid
Shop at eBay
Copied title and URL