According to a statistical report, endometrial polyps are very common as up to 3 in 10 women may have them at some point in their lives, but fewer than 1 in 100 people develop polyps before age 30. Today, we will discuss the 7th live class about endometrial polyp held virtually with Blue Bee One’s medical advisor, Doctor Shi Armero.

The Definition of Endometrial Polyp 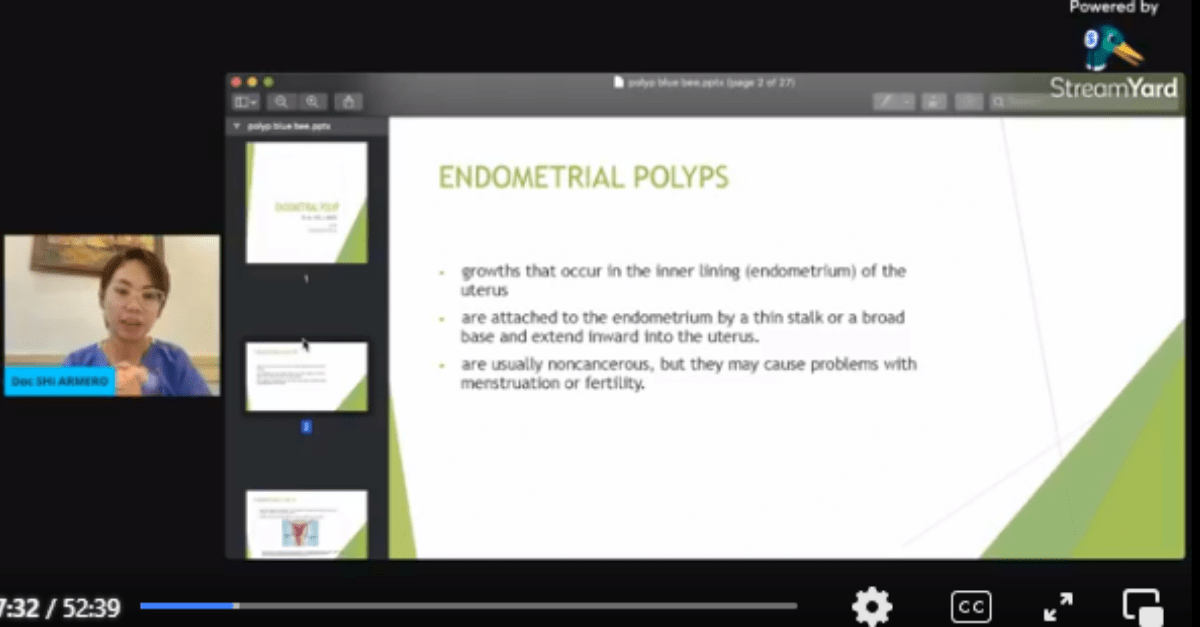 Doc, is this cancerous, or does this lead to cancer?

These are usually non-cancerous but may cause problems with menstruation or infertility. Especially those who had difficulty conceiving.

She added that a woman may have a polyp but she does not develop symptoms. It is possible that she does not feel anything almost all the time. It can’t occur to any woman of all ages but it is common among women ages 40 to 49 years old, or those women who are at the pre-menopausal age. 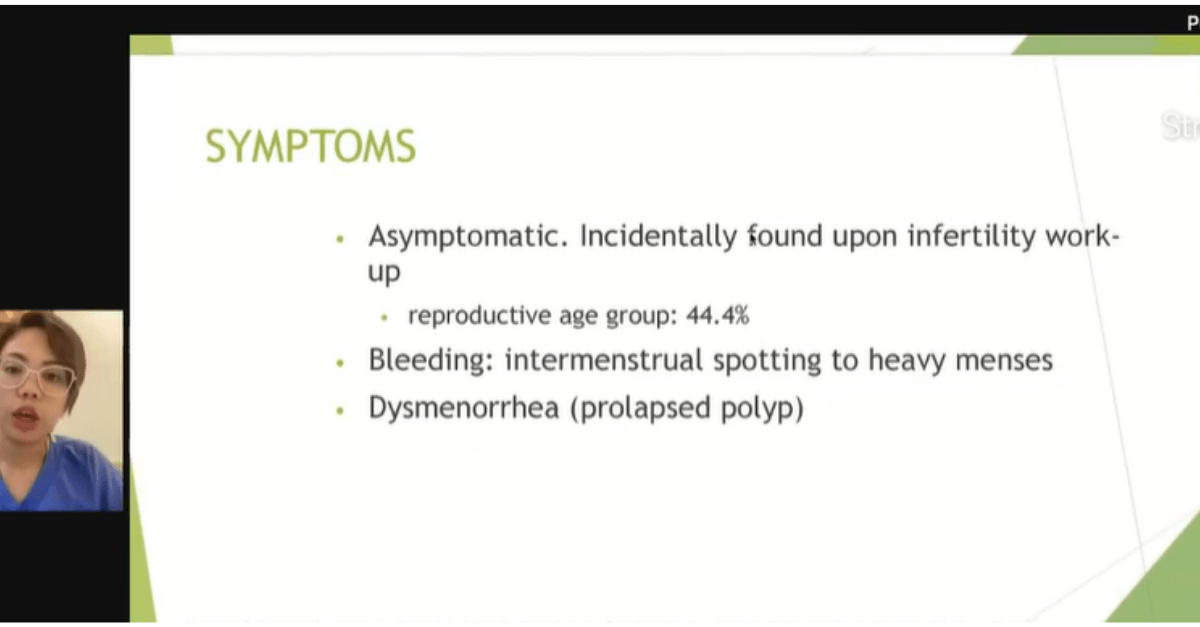 Dr. Shi described the common symptoms of endometrial polyp in the next slide. It can be a heavy flow during her days of menstruation, or it can be spotting or bleeding in between periods. It is usually called intermenstrual one week without menstruation when a woman experiences spotting and then no more menstruation and then her usual menstruation comes.

Below are the major symptoms of this condition:

This condition is very common among infertile women as there are many cases where they have been diagnosed with an endometrial polyp. Also, it is uncommon for women who have endometrial polyp to have cancer in their endometrium because it mostly occurs among the older population and it happens around 0 to 12.9% and again, it depends on the population being studied. Mostly, women who are at a menopausal or pre-menopausal age are affected by this condition.

Doc, what should be the things that I might be having that could be the risk of developing the polyp?

Among all these, age is the best-documented risk indicator of the endometrial polyp. So, if a woman is increasing in age around 40-49 years old, that can be a risk factor.

Here are the common causes and potential indicators of endometrial polyp:

Dr. Shi explained that those women of reproductive age are asymptomatic because endometrial polyp is usually found when a woman has infertility issues. Those at the reproductive age should wait until she is 35 or less than 35 years old to see medical consultation if they don’t get pregnant.

Asymptomatic polyps are most likely present in 3-5% of infertile women and up to 10 to 32%. These polyps at 44.4% in women of reproductive age are asymptomatic. While 10-30% of infertile women have endometrial polyps. Take note again that among women in menopause who already have polyps, the risk of malignancy ranges from 0-12.9%.

It is important to make sure that our elderly ones, the mommies or grandmas who already have menopause, there is a possibility that they may have this condition as estrogen in the form of estrone can still be produced in the fat that is accumulating during their aging and may sill stimulate the growth in the endometrium.

Small polyps are most likely to regress compared to the larger ones. Surgical removal is recommended to allow natural conception or assisted reproductive technology giving it a greater opportunity for success. In women with an endometrial polyp, there are patterns of abnormal uterine heating. You should remember that endometrial polyps are influenced by increased estrogen level activity.

Among these women, women with very high cholesterol in the blood or women with a quite heavy body mass index are mostly affected. The most significant risk factor for the presence of endometrial polyps is age. Again it’s very common among ages 40-49 years old however again it can occur among reproductive age especially if they have problems in their estrogen level and activity, especially among those with hormonal imbalance because it’s a common condition among or close age group dyslipidemia. Additionally, IGT or  Impaired Glucose Tolerance is commonly associated condition with endometrial polyps 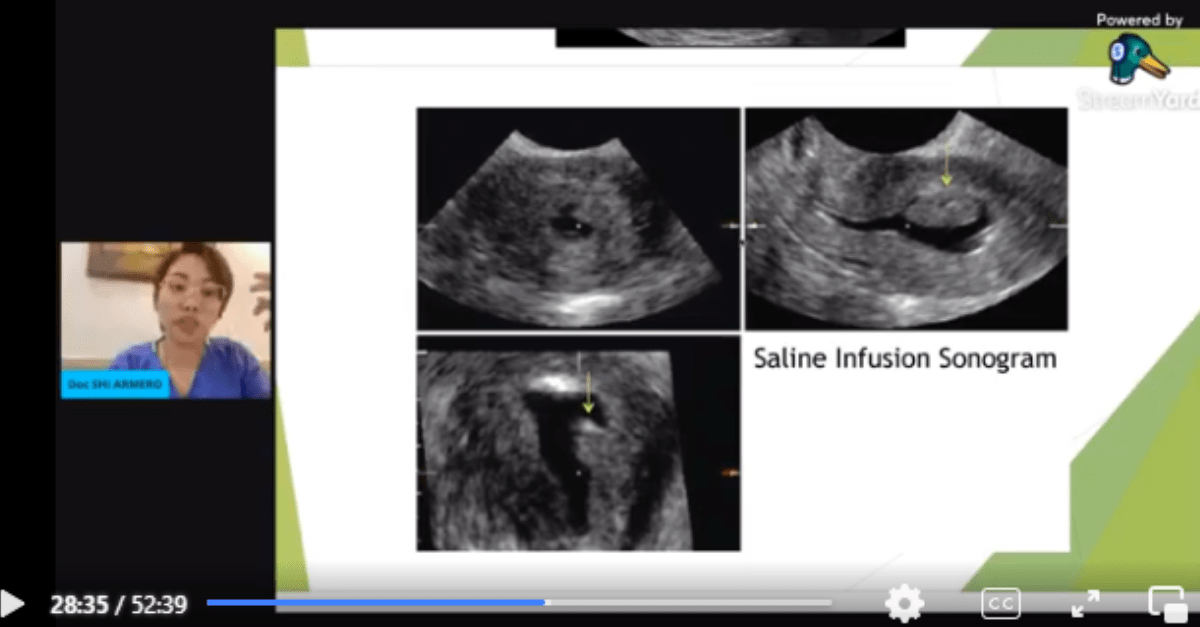 What are the ways for menopausal and pre-menopausal women to prevent having endometrial polyps? It is essential to eliminate the excess estrogen production and activities, weight loss, proper diet, and exercise. Dr. Shi suggested some ways for women to prevent this condition. Here are some of them:

Below is a list of top foods high in antioxidants according to the American Dietetic Association:

Endometrial polyp is a condition when there occurs a new growth in the inner lining of the uterus or in the endometrium. the major symptoms of this condition are heavy flow during menstruation and/or spotting or bleeding between periods. The common causes and potential indicators of endometrial polyp are pre-menopausal or menopausal age, hypertension, obesity, anovulation, dysmenorrhea, and elevated estrogen levels. To prevent you from having endometrial polyps, it is important to maintain your normal BMI or body mass index through weight loss, maintain a proper diet by avoiding high meat consumption, take 150 minutes of moderate-intensity exercise, or 75 minutes of high-intensity workout per week, and eat nutritious and antioxidant-rich foods.

What Should I Do to Have a Body that Can Get Pregnant Easily?

The previous explained that when you should start on infertility treatment. We have also discussed about identifying the...

“Is this normal?” – Concerns and Early Pregnancy Symptoms

There are lots of things that we do not know about the first pregnancy. As the hormonal balance changes significantly in...

Causes and Prevention of Back Pain During Pregnancy

There are many pregnant women who suffer from lower back pain in late pregnancy. It causes various issues and obstacles ...

When you are pregnant or trying to get pregnant, you may want to take a break from work or relax at home with a cup of c...
How to avoid postpartum depression?
How Belta Folic Acid Can Change Our Body?
Home
Fertility and Pregnancy